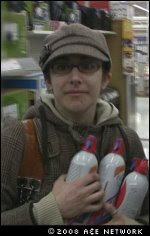 Watching Intervention isn't something I make a habit out of. It's not as though there's anything uplifting or positive about the program, most of the time. Typically, the narrative arc goes something like this: 1) we meet an addict, watch them get high, see testimonials from friends and family, 2) learn about promise, talents, and self squandered by extreme drug abuse, 3) get a sense of how the addict's destructive spiral affects loved ones, 4) an intervention is staged, usually with ultimatums given, ala "if you don't go to this rebab clinic that we're offering to pay for, you're totally dead to us, that's it," 5) the addict goes to rehab, and 6) addict recovers and lives happily-ever-after, relapses, or some variation of those two outcomes.
The handful of episodes I've caught have centered, mostly, on alcoholics - not surprising, because alcohol is legal and easy to get. Of course, there are also meth heads, speed freaks, coke fiends, and so on.
But earlier this week, Intervention profiled a young woman addicted - really addicted - to fucking inhalants - the chemical, compressed air stuff that you're supposed to use to dust electronics. Her name? Allison. She'd buy 8 to 10 cans of this stuff and just suck one can after another down in her apartment, eyes all googly, frame slight and fragile from lack of sustenance, body crumpled on a couch. Her on-camera interviews and testimonials were difficult to watch, because she was so gone that focusing in was impossible. She was petulant, sarcastic, stubborn, and bent on self-annihilation as a means of getting back at a mother who she felt had been a terrible parent and a father who'd split the scene years before. (Allison and her sister had been sexually abused as children, but the abuser got off scot-free due to a lack of evidence.) She carried on an affair with a married father of two who footed her various bills; she didn't work.
(In the end she was fine, but that isn't the point.)
I was transfixed. I was sickened. I had to watch the whole thing. I said to Alecia, who was watching with me: "How does she have any brain cells left? She should be a vegetable. Holy shit."
I've known people who've abused this drug - and other drugs, besides - and have seen what a small dose can cause. The idea of living on inhalants, though, that's just in a league of self-loathing that's beyond my comprehension.
I couldn't believe that nobody - but nobody - at the Wal-Mart or whatever other massive superstore she shopped at could be bothered to report her.
There's no reason that anybody needs to purchase 10 cans of compressed air every single day.
The why of this isn't in question. When I was younger, I couldn't quite grasp why so many adults had heart attacks and addictions, why they fell apart. Life, I was sure, couldn't be that overwhelming and crushing and terrible. No way. Then I grew up, and I got it. The sheer volume of worries, of details, of hurts, of burdens, and minor emergencies that adult life hurls our way is nothing short of formidable; it's no surprise that so many of us want to obliterate ourselves, to ward off the constant sense of nausea that's perpetually on the brink of consuming us whole.
In some college philosophy class - Eugenia Porto was the professor, I remember that clearly - while trying to make some sort of point about how the masses crave opiates, I said something about a worker being beaten about mentally all day, only to go home and surrender to his television set every night, as opposed to doing something constructive or progressive. At the time, I didn't watch television; I was too busy writing poetry, fiction, and journalism, and reading for courses and hanging out with my friends and trying to get laid, drunk, or both.
I felt that I was a cultural contributor, and that I would always be one; I didn't foresee a future in which I'd come to rely on the idiot box as a drug of choice and a way to connect with my family following a long day of disconnection. Or - that being the case - that my days would be too packed for me to translate my television viewing into serious or frivilous criticism, that I would often hatch ideas for blog posts en route to work only to get caught up in whatever situations or deadlines said day might bring, quickly losing track of every facet of whatever concept I'd so carefully honed to precision, that after years of drought I'd keep coming up with great fiction ideas only to have no time whatsoever to implement them, that my friendships would dwindle down to a mere handful.

Ah, yes. Friends.
There were a great many things that disturbed me about this episode of Intervention, but the one that really got me, that almost made me tear up, was this: Allison didn't have one single fucking friend show up at her intervention. Not one. If she'd had any, they'd written her off after she got hooked on inhalants in college - prior to having to ditch her pre-med track and settling for a Music degree. It just left me with an empty feeling inside. Allison struck me as an especially selfish young woman, but seriously, for real, not one compadre could hang in there with her, steer her onto a healthier path, kidnap her for a clean-living weekend in Borneo? Really? Jesus.
Posted by Raymond Cummings at 12:16 PM No comments: 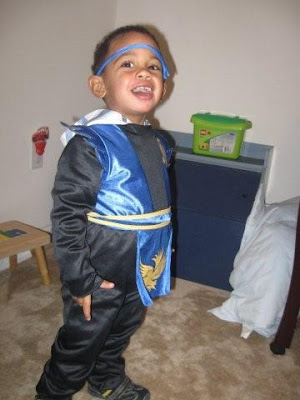 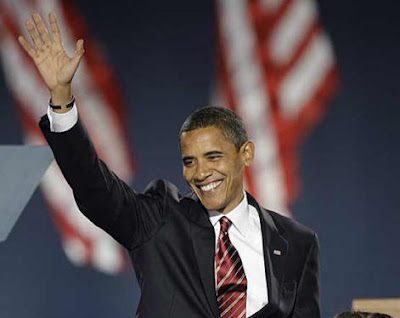 Hear it here.
Posted by Raymond Cummings at 1:13 PM No comments: 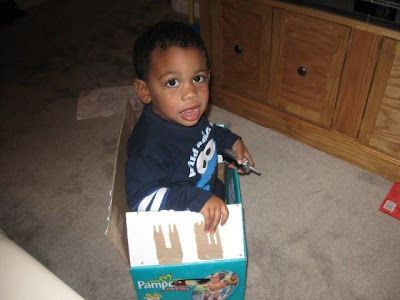 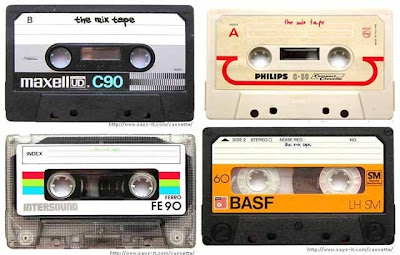 Ecstatic merry sexy pop songs you may remember from heavy rotation on TRL! Download away at no cost, no risk. Happy grooving, everybody!

Damn, America! You Got It Right This Time 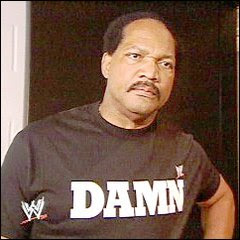 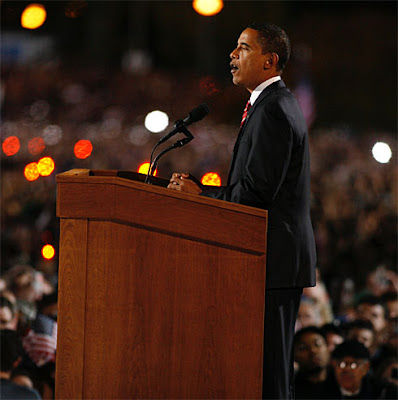 Peep this, and pat yourselves on the back - you made the right choice.
Posted by Raymond Cummings at 10:19 AM No comments:

11/3/08, 5:00 p.m.: I'm leaving work, driving home. Four people (one of them was a child or just an extremely short person) are holding "HONK FOR OBAMA" signs on a median strip, bundled up against the cold. Lots of resultant honking, but my horn's broken - something I wasn't aware of - so I roll down my window and do a sort of Arsenio-style fist pumping thing, shouting "OBAMA! OBAMA! OBAMA!" One dude on the strip gets a huge smile on his face, looks right at me, and starts chanting with me! Awesome!

11/4/08 7:33 a.m.: So voting was a straight cinch. Got to my polling place at 7:50 and there were maybe 30 people already in line, mostly senior citizens. No-one talking politics, nobody forcing literature. Area's semi rural so maybe no surprise on the numbers. (We vote at the Monroe Township building in Selinsgrove, PA.) I was the only non-white face or so I thought - until a few minutes after the doors opened when I saw another black person leaving. Hilarity: overheard lots of bitching about how long the wait was, how ridiculous it was. While to yours truly - who waited 3-4 hours four years ago to vote for Kerry - this wait seemed eminently reasonable. No hassle when the older ladies who run the voter rolls checked me off, spent only a minute in the voting booth, then had to feed the ballot into some machine and I was outta there. Forty people in line when I returned to my car - including lots of indians and hispanics. Struck up a conversation with a teacher who swore, adamantly that if McCain won she would never vote again for anybody ever. "I mean, you have to be brainless to vote for that guy," she said. "And don't get me started on Palin." It feels good to be done; now to keep my fingers crossed for Obama.

11/4/08 8:30 a.m.: Someone has taken maybe 30 Obama/Biden signs and fashioned them into an outward-expanding "V" on a berm adjacent to an exit ramp near the entrance to Harrisburg.

Posted by Raymond Cummings at 9:10 AM No comments:

The blood-blister yawl of Bottle Up & Go singer Keenan Mitchell is vintage Soundgarden-era Chris Cornell, but the boiling rawk brimstone beneath is electric blooze whiplash napalm: electrified-fence riffage lashed to (and by) crashing drum kit indigestion and face-melting sax squalls. On “Wayward Son,” Mitchell belts out the kind of Dear Mom missive no momma ever wants to receive—“I got so thirsty, I fell down the weeeeeeeeell/Fell asleep in my bed, I woke up in Hell”—he’s in too deep, a gun in his hand and a dead girl in his bed, and “Wayward Son” is a jolting study in turmoil, a skidding declaration that shit’s fucked up beyond belief that doesn’t project a path to positive resolution.

Would you characterize yourself as a wayward son?

I have had a few moments in my life when I felt like the wayward son, not to mention the countless nights waking up on the living room floor with the room spinning, thinking about how my mother would cry if she saw me... The worst was probably getting rousted out of my jail-cell bunk at five in the morning in the Florida panhandle to find out that my mother had just paid my bail from our home in Oregon, and I hadn’t even asked her to do it. I guess she found out from my uncle, whom I had called with my one phone call to ask for an immediate loan. The worst part was calling her from the jail phone and hearing the automated voice say “Hello, this is a call from the Escambia County jail. Would you like to accept a call from—my voice, forlorn—“Keenan Mitchell” That’s what I wrote the song “Low” about, incidentally.

You really attack the vocal here. Have you ever blown your voice, or feared that you would?

I have to spend a few days after every little tour we do whispering like the Godfather because my voice gets so wrecked. My range has gone down by at least a quarter octave during the time I have been singing for Bottle Up & Go, from all the smoking and screaming. It’s gotten so bad that I can’t sing some of the songs we used to play when we started out. I think I have a plateau now, though. My voice isn’t going to get much rougher than it is now. I hope.

If you found out in advance that you were headed straight to Hell and were allowed to bring a case of any beverage with you, what would it be?

Initially, I thought I would just pick up a case of the cheapest malt liquor at the corner store before I headed off to Hell. Lucas [Carrico, saxophonist] persuaded me that a flat of Graves grain alcohol would be the way to go. As long as you are going to suffer for all eternity. You might as well bring something that will last a few weeks.
Posted by Raymond Cummings at 4:26 PM No comments: