Seriously, if this "Party Hard" dude ever writes an autobiography, I'm so there, mang. Here he's talking to Wire's Marc Masters about producing my favorite 00s noise/no-wave band as part of a lengthy "Invisible Jukebox" interview transcript you can find on the magazine's website (I highly recommend that you check it out):

MARC MASTERS: No. [Vocals come in]

ANDREW W.K.: This is one of my favorite songs by them. At this time they were making these songs that were bouncy and upbeat, with really strong vocal hooks. I really like the vocal hook on this one (sings along). And that drumbeat with the syncopation - this is a really exciting era of the band.

MARC MASTERS: How did the idea of producing them come up?

ANDREW W.K.: I had helped out on a couple of their albums. I was always around and involved, but I'm not sure how it came up. It just seemed very obvious to all of us, I guess. The feeling was in the air that it made sense to do that now. And what I proposed was what they wanted to do. To record in a really good studio, to be able to hear everything, and to be able to work on it as long as they wanted. That's what I felt I could offer them. It wouldn't be rushed and it wouldn't be frustrating, and I felt confident I could provide that for them. I know they had always made the records they wanted to make, but I don't know that they had the opportunity to work on them as long as they could. So I wanted to give them the best of both worlds.

MARC MASTERS: How was working with them, given that you know them so well?

ANDREW W.K.: It was an amazing experience. There were times when it was an ordeal, and then there were times when we were just on this huge high, and so excited about the work that we were doing. It got better at every step along the way. As far as the personal interactions, I learned a whole new understanding of myself, and how it is to work with people, friends or not. I learned that it's not always so important to say your ideas, to say what you think. Sometimes you have to have faith that the other people are thinking the same thing, and will arrive at the same place. A lot of times at the beginning, I would have an idea and I would say it, and sometimes they would agree, and sometimes they would say no. Sometimes it would just not be the right time to say something. But I noticed later I could still have an idea and not even say it, I would just keep it in my mind or even just let it go. And then, sure enough, it could be minutes later or days later, but somehow or another that idea would come to pass. Either just happening on its own, or someone else would suggest it, or it would just evolve out of circumstance. But that approach I was then able to use a lot when recording with Lee Perry. I don't think I would've been able to work with him had I not just come off of making the Sightings record. I've talked to other people about it, and I've been told it's a process called "Silence", where you silence your own impulse to blurt something out, and you put it inwards into your subconscious. The more you keep it on the inside, the more power it has from working inside out. That all started with Sightings.
Posted by Raymond Cummings at 11:09 AM No comments:

You just knew this would happen, didn't you?

NORRISTOWN, Pa. - Montgomery County authorities say a man stabbed his brother-in-law during an argument over who should get the Democratic nomination for president.

What's more, Jose Ortiz, 28, who's charged with felony assault, is a registered Republican.

District Attorney Risa Ferman said Ortiz supports Hillary Clinton and Sean Shurelds supports Barack Obama. She told reporters Monday that the two got into an argument in a Collegeville home Thursday night and Shurelds tried to choke Ortiz. She says Ortiz then stabbed Shurelds in the abdomen.

Shurelds was taken to a hospital in critical condition, but is expected to recover.

Posted by Raymond Cummings at 10:36 PM No comments:

Hate the game, not the player, right? Saying that this grimy threesome's third outing is boilerplate generic NYC gangsta rap is as tiresome as the tropes on display here; the femme-R&B chorus of "Music 4 the User" succinctly lays it all out over a banging, red-eyed Chinky Evidence synth beat that almost glows: "Crack, coke, piff/Motherfucking wet, guns, sex." Talk about the middleman cutting out the middleman. Beck's more endearing, chaotic side, it turns out, was shunted off to international singles or left on the studio floor--and these castoffs smoke their better-known cousins. Way back when, the Raveonettes—along with the Strokes, the White Stripes, the Hives, and dozens of other would-be contenders history has since forgotten—were supposed to save rock, right?
Posted by Raymond Cummings at 10:59 AM No comments: 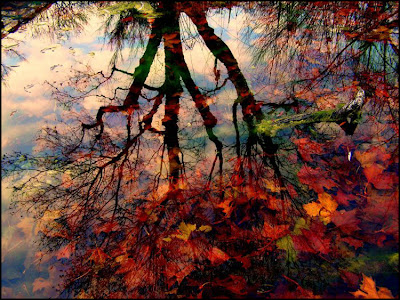 *I should stress that I didn't take this photo; found it on some Russian photo site devoted to reflected images.
Posted by Raymond Cummings at 8:42 PM No comments: