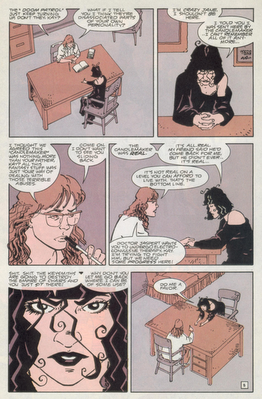 Posted by Raymond Cummings at 11:23 AM No comments:

A Season of Discontent, Part II: “Let’s Give Peace a Chance,” or “Can’t We All Just Get Along?”

So I think I’ve finally figured out my favorite Breeders song. It’s not especially catch, not even in the same league as “Cannonball” and “Iris” and “Summer” and I haven’t heard Title TK at all so maybe I’m full of suet. Anyway, “I Just Wanna Get Along,” that’s the track, and I don’t remember any of the verse lyrics or the hook really or anything else, except that the chorus consists of an exasperated Kim Deal blurting “I just wanna get along” over and over again as though she were stuck in the middle of an endless argument she’d had enough of but couldn’t find any way out of. She sounds tired and deflated and defeated, and lately I can definitely empathize.

It’s funny. I scribbled four pages of pathos on a legal pad two weeks ago in my mom’s living room, when I was supposed to be working on book reviews but got too emotionally overwrought about other stuff. Now this is turning into a running series of soapbox grouses, a way to just sort of unburden myself. I don’t know that I’m feeling any better yet. Maybe I said this elsewhere but sometimes I feel so fucking powerless in the living of my own life that it scares me. Are you there, God? It’s me, Raymond. Can we make some kind of deal? 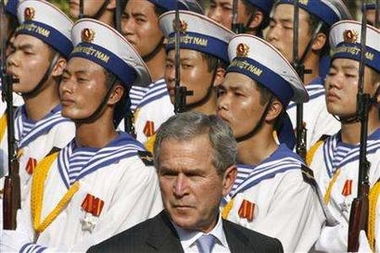 (Thanks Doug!)
Posted by Raymond Cummings at 12:30 PM No comments:

A Season of Discontent, Part I 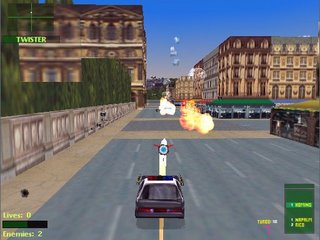 "You think it's easy, but you're wrong." -Pavement, "Zurich is Stained"

(The image, from Twisted Metal II, is a shout-out to Dave Labowitz - great talking to you the other night, dude, we've gotta do that more often!)

So, I dunno it I've really gotten into it here, but being a dad is great, and not as impossible and uncomfortable as I'd expected it beforehand and considered it early on. Back then I was petrified by the thought of holding Nodin and changing his diapers, but 10 weeks or so in I'm pretty sure I've gotten the hang of it - though the lil turtle keeps getting heavier and heavier and more and more mobile, or, maybe that's not the right word, I should probably say...agile? No, that's still the wrong word. Let's say that he twists and propells himself around, even while it my arms, making it necessary to pay close attention and keep a solid grasp of the guy so he doesn't break away and fall or inadvertantly headbutt you in the jaw (which he's done plenty of times but, when he did it this weekend, he actually hit me pretty damn hard for once, hard enough to get my attention, anyway). Nodin's sleep schedule varies - some nights he's out all night, other nights he wakes once or twice or makes noises like he's gonna wake up but then he doesn't, other nights still he's up all the time and his mom and dad are listless zombies all the next day. Dude eats every 2-3 hours, but it seems like every thirty minutes - by the time the formula's been prepared and he's eaten it and dosed off or whatever it's suddenly time to start the routine all over again. Usual amount is 6 ounces of the soy-mix stuff, but sometimes he'll only eat an ounce or two or maybe just a sip, then drift off to dreamland. (which, you know, I have a question for anyone reading this, please don't be shy with your answers: what do you think babies dream about, if they dream? Nodin woke up a few times this past weekend screaming his head off and Alecia said "he probably just had a bad dream" and I said "it's weird to think about that - we don't know what that dream might have been, and we'll never know because he won't remember it!" and she said "you never know.") We've got a bunch of battery-powered toys and contraptions and seats and stuff for him, and he's at the point where he eagerly interacts with the ones that make noises and play dinky kid's song tunes, which is always really amazing to watch, in no small part because it just makes me think about how completely stunned I still am that I'm a dad and he's my son and he's actually out in the breathing, living world with us - that, despite my knowledge, which is everyone's common knowledge and biological fact, of the reproduction process and it's many many demonstrations, everything worked out for us and deposited a smiling, gurgling (sometime screaming), wild-haired, drooling, adorable lump of love in our care. Sometimes I feel like I don't deserve him at all...even though I only see him a few days a week.

Is this, I wonder, how active-duty members of the military feel right now? That sense of homelessnes, of adriftness, of exhaustion, shuttled between the hearth and encampments far distant, with no clear idea when fate will finally see fit to cement them at one end or the other?

Every Monday morning at 4:25 a.m., I awaken in Selinsgrove, Pennsylvania, wash my face, dress, pack up my car, say goodbye to Alecia and Nodin, and begin the three-hour-or-so drive south to Abingdon, Maryland under veil of frosty darkness. Awaiting me are an avalanche of proofing work, freelance assignments so numerous (I've overbooked myself considerably), traffic jams that seem to have no cause, generally fruitless online job searches conducted in the bustling centre of disrespectful humanity that is the Pikesville Library, and nights spent along on my mon's fold-out sofa. By Friday at 4:30 p.m. I'm on my way back to north, inching along in the creeping twilight. It's unsettling and depressing, this interior sense of desolation and disconnection from people and places, this straining to remain positive that before long some hiring manager in Harrisburg or Camp Hill or Williamsport or State College will happen upon my emailed/snail-mailed/electronically-submitted application to be a technical writer or a mailroom prole or a PR flack and have a eureka moment and hasten to a telephone to breathlessly beg me to come work for him or her. Discouragement thens to set in when once has been job hunting for nearly a year without even the slightest hint of an interview offer - not merely for the central purpose of residing full-time with one's nuclear family, but because the form-letter rejections and negations-of-self-by-electronic-silence hammer home he fact that I'm not getting any fucking younger or more attractive to employers. Far enough removed from my full-tome reporter days that newspapers aren't interested; so invested in my current profession (proofreading, half a decade, in hindsight perhaps at least attempting to climb the corporate latter a wee bit higher might have been beneficial, thanks for asking) that other companies probably think I'm capable of little else. Add to this the fact that publishing/media/etc. jobs are all but nonexistent/hunted-to-extinction in the relevant part of the state and the abject helplessness of this situation becomes clear.
Posted by Raymond Cummings at 11:33 AM 3 comments: 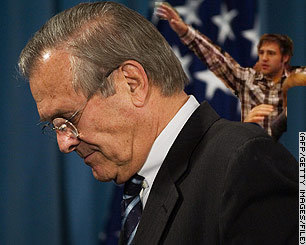 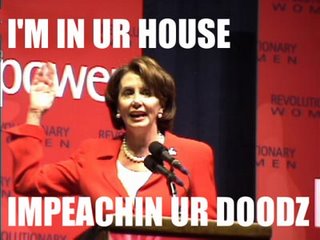 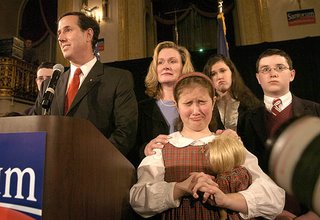 It it unseemly to gloat? Sure it is, but who cares - we totally won this time.

Perhaps it's foolish of me to feel this way just a couple days after Election Day, but I'm overcome by a sense of political optimism that hasn't been this strong since, say, October 2004. Nothing much will ultimately change, really, but right now I feel like John Travolta at the end of "Staying Alive," and I imagine a lot of other folks do, too. Rumsfeld's being put out to pasture was just icing on the proverbial cake.

Okay, Pelosi, Reid, et al. - this is our window, or chance to start making America a decent nation again; don't blow it.

Father in Awe, Offspring in Repose 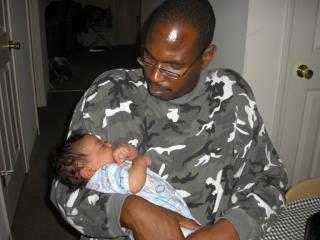 Posted by Raymond Cummings at 11:29 AM No comments: