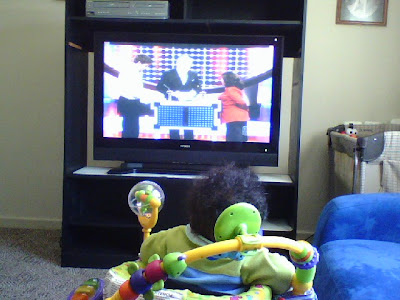 Posted by Raymond Cummings at 7:43 AM No comments:

From the mouth of a not-yet-born-baby...

Got another Pazz & Jop comment in this year!
Posted by Raymond Cummings at 5:51 PM No comments: 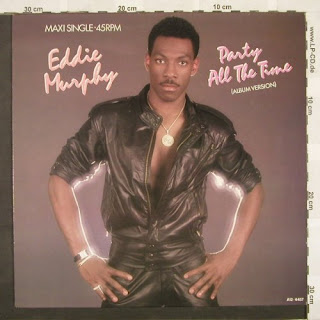 I'm trying to figure out why this series of McDonald's ads is irking me so much. You know the ones. Somebody does something mindbendingly stupid - trying to dig an escape tunnel via a wall in an office building, using a pool cue to make a golf shot, whatever - then this dude who looks very, very, very, VERY vaguely like Eddie Murphy back when he thought he could be a huge pop star raises his eyebrows, smugly says "Looks like somebody missed Snack Time," then bites into one of those Mickey D's chicken-lettuce-pita wraps as if to indicate that he's way above everyone else who choses not to shell out for some overpriced piece of fast-food toxic waste at any time that isn't breakfast, lunch, or dinner. Dude, if you're so brilliant, why are you hanging out with these fools? Why haven't you taken over the world already? Why haven't you formed a Snack Time cult and/or pyramid scheme with books and seminars and Snack Time Kool-Aid? Why do I even care about this? Why did I post that photo? When I did I turn into Joe MacLeod?
Posted by Raymond Cummings at 11:27 AM No comments: 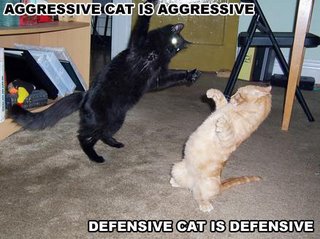 Nick Sylvester, once again making me confront how much I suck at music writing. Thanks, dude.

Alecia and I were watching the Grammies last night and, you know, I didn't see the whole thing, but I saw the "coming later, performances from etc." pre-we're-going-to-commercial announcements a thousand times, so I knew that the Red Hot Chili Peppers would hit the stage at some point. The Red Hot Chili Peppers? The Red Hot Chili Peppers are the recording industry's rock heavies in 2007? A sad, sad state of affairs, and the only conclusion I can draw there is that dudes must have sold like a kajillion copies of the 2-disc set Stadium Arcadium or something, which means - given Soundscan's effed up logic - they actually sold 2 kajillion copies and whoever put this show together figured they'd be the biggest draw for the slice of the audience who dig on the rockin' and the rollin'. The rest of rock's vanguard on hand to rep their set: John Mayer and a reunited Police? Yeah, I know.

Nothing else to really say about the show, except John Legend's a total dork, Corinne Bailey Rae can only get massively more popular than she is now, Prince is magnificent even when he's just announcing an award or introducing Beyonce, and as much as I support the Dixie Chicks, Natalie Maines' award-acceptance is just this side of demented (but wait, I think everybody there's drinking through the whole thing, right? That'd explain a heck of a lot.).

Of Montreal/Deerhoof
Clap Your Hands Say Yeah
Love is a Mixtape
Posted by Raymond Cummings at 11:21 AM 1 comment: