1 OUT OF 10 MUSIC EDITORS HATE VOGUING TO DANZIG

I won't say where these were supposed to run, but I will say that assigning reviews and then acting like you never got 'em when they're submitted is bullshit. Needless to say, my days of scribing for NAME REDACTED
Posted by Raymond Cummings at 3:47 PM No comments: 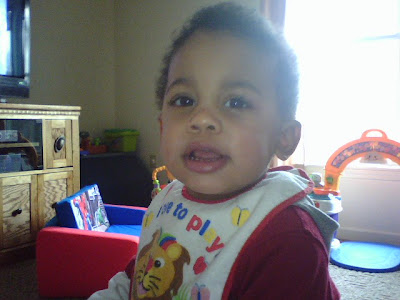 1. Pulling packing boxes, pillows, and Mr. Blankie off of Dad's head when Dad has hidden beneath them in a silly attempt to, in the process, amuse or startle Nodin.

2. Losing his pacifiers while sleeping, causing him to half-awaken in a whiny huff.

3. Being chased around the house by Dad, who is grunting "DUR! DUR! DUR!" is a comic-threatening manner. (Mom's variation on this theme: "Gonna GETCHA! Gonna GETCHA!")

5. Having books read to him, sometimes the same books several times per day. Nodin's especially partial to On The Day You Were Born, The Very Hungry Catepillar, and one about the Wiggles that's supposed to teach kids about reading and setting clocks. It's rewarding beyond words to watch his face light up when he's handed you a book and you've opened it and started reading; he doesn't totally understand what's being read yet, of course, but something about the combination of familiar sound constructions and familiar voices just seems to invigorate and temporarily fascinate this eternally curious/mobile little boy.

6. Trying so, so very hard to talk and sing. He's almost there, and none of us can wait for him to arrive and start shouting out statements at the least opportune moments possible.

8. Grabbing, toying with, and breaking everything he can.

9. Opening and closing doors. Cabinet doors, oven doors, and closet doors - but not front doors or refrigerator doors (yet). He isn't supposed to open any doors, of course, but it's fun to pretend that no-one's telling him not to do this stuff.

10. Absconding with Mom and Dad's waterbottles and dropping them into the living room waste basket, because he can.
Posted by Raymond Cummings at 12:00 PM No comments: 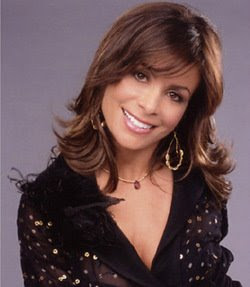 BECAUSE, on American Idol:

1. She no longer seems to have any idea where she is while appearing on national television.
(On this show, the expectant tension is supposed to center on the performers, but more likely it's centered on the camera operators and control room staff who have to decide how much attention should be directed towards the judges' table where Paula Abdul's getting her loon on and Randy Jackson and Simon Cowell are pretending conditions aren't being created for a complete Courtney Love-esque trainwreck.)

2. Following contestant performances, she rambles on longwindedly, incoherently, and disjointedly, as though the sounds coming out of her mouth bear little or no relation to whatever positive den-mother kudos she's thought up; thus, dear Paula comes across as deranged or mentally disabled at best, totally smacked-out at worst.

3. She keeps threatening to fall, sideways, out of her chair; only arrogant Simon Cowell stands between Miss Opposites Attract and certain concussive disaster.

4. She dances to songs - both sitting and standing - really, really badly. Now, I understand that this world is full of bad dancers; I'm one of them, admittedly. But Paula Abdul doesn't even come close to matching the beat of whatever Danny or David or Carly or whoever's belting out; it's like she's hearing a totally different song and swaying or bopping to that. Again: on national television.

5. That glassy, out-to-lunch grin. It's ever-present and totally fucking scary. You know the one.

6. Sort of a corrolary to #2, I guess, but the woman can't seem to finish saying words most of the time, managing, like, a first syllable before skipping to the first syllable of a different word. It's like she's having a perpetual heart attack that never becomes fatal or requires a trip to the ER.

8. Those hats. Those outfits. That hair! Viva fashion, and all that, but expensive and questionable couture and heavy, heavy makeup only serves to make crazy folks seem crazier.

9. Tears! Tears, tears, tears. Nothing wrong with a good cry, but so many tears when no-one's died or anything. Paula, they're just going home, and home's a good place!

10. Or maybe all of this is tied into promotion for her comeback record later this year and I'm just a big ole all-day sucker.
Posted by Raymond Cummings at 12:03 PM No comments: